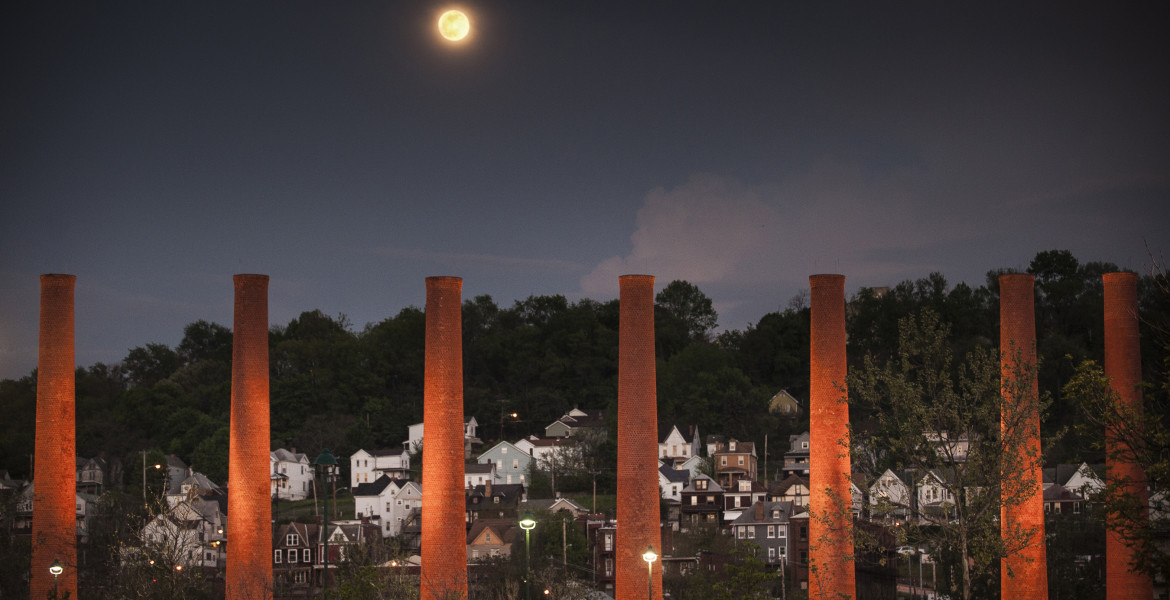 In 1955, when renowned photojournalist W. Eugene Smith was creating images of Pittsburgh that would eventually become a book called Dream Street, Pittsburgh was the quintessential Rust Belt city.

According to the 1950 census, Pittsburgh was home to more than 676,000 residents and was the 12th largest city in the country. Steel was the city’s main industry, and aluminum, glass, petroleum and shipbuilding were also part of its economy.

Although Pittsburgh was thriving, the industrial smoke was sometimes so thick that streetlights were on during the day giving it the nickname “Smoky City.” In an effort to clean up its reputation of a dirty and polluted city, civic leaders began projects to transform the city. Pittsburgh began to describe itself as undergoing a “rebirth,” replacing its smokestacks with glass skyscrapers and its slums for modern neighborhoods. It was being called a city in transition.

Today, the U.S. Census Bureau estimates that the population of Pittsburgh is about 305,840, less than half of what it was during the city’s economic heyday. But once again the Steel City is said to be experiencing a rebirth, with a rapidly growing economy largely based on healthcare, education, technology and banking. This may be true for Pittsburgh proper, but the scene looks a lot more bleak for the towns along the three iconic rivers that converge in the city.

Ironically the steel industry that brought Pittsburgh international fame existed almost entirely outside the city on the banks of the famous Allegheny, Monongahela and Ohio rivers with the exception of a Jones and Laughlin’s complex located just upstream on the Monongahela. Other famous steelmaking complexes were located farther upstream in the towns of Homestead, Rankin, Braddock, Duquesne, McKeesport, and Clairton. Downstream along the Ohio River stood McKees Rocks and Aliquippa.

These towns are the Pittsburgh suburbs that helped make Pittsburgh an industrial powerhouse. Driven by an influx of foreign-born workers at the turn of the 20th century. Immigrants helped fill jobs in the mills, where steel was forged for the aircraft and battleships that helped win two world wars.

But as you drive through these towns today, it’s clear they have been largely forgotten. Once bustling shopping corridors are all but empty. The company homes where workers raised their families are showing their age, and residents still reminisce about the “good old days” before the mills shuttered.

Nationally, about 55 percent of people who live in poverty reside outside of cities. But in Allegheny County, where Pittsburgh is located, 61 percent of people live in poverty and the number rises to a staggering 79 percent in the Pittsburgh metropolitan area, which includes Allegheny and its six surrounding counties, according to a 2013 Brookings Institute study titled Confronting Suburban Poverty in America.

In recent years, the media has reported extensively about the rebirth of Pittsburgh, but very little attention has been focused on the city’s suburbs and the plight of the people living there — except, perhaps, during election season.

For me it is even more personal since my mother and father were born and raised in Aliquippa, home to what was at the time the largest steel mill in the world, the Jones and Laughlin Aliquippa Works.

I have seen firsthand how Aliquippa has declined. My parents and relatives tell the stories about how wonderful and bustling the town was before the decline of the steel industry and the closing of the mill.

It is because of these stories and memories that I feel drawn to tell the story of Aliquippa and the other former steel towns near Pittsburgh. The immigrants who came to these town came with dreams of a better life. For a time it seemed as though those dreams would be found in the streets of their new home. Many of the people living there today are doubting that those dreams still exist.